Baldwin County, Alabama Named One of the Strongest Local Economies in America 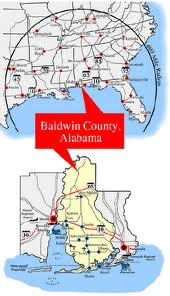 Baldwin County, Alabama was recently ranked by Policom Corporation as the 27th strongest micropolitan economy among the 527 U.S. local economies studied by the company.

Policom is an independent economics research firm based in Palm City,  Florida, which specializes in analyzing local and state economies and economic development.

Micropolitan statistical areas are economies with populations of between 10,000 and 50,000 people.   The Baldwin County statistical area is composed of Daphne, Fairhope and Foley.  According to Policom, the Baldwin economy was the third strongest in the Southeast and tops in Alabama.

Baldwin County was established on December 21, 1809 ten years before Alabama became a state. Previously, the county had been a part of the Mississippi territory until 1817 when the area passed into the Alabama territory.

The county seat is Bay Minette in the northern part of the county.  Perhaps the best known community is Gulf Shores which is located on the Gulf of Mexico and known nationally for its sugar white beaches, stunning natural beauty and laid back lifestyle.

In geographic size, Baldwin is the 12th largest county east of the Mississippi River and is larger than both the states of Delaware and Rhode Island.

This is the eighth year in a row that the Baldwin economy has been listed in the top 10 percent in strength of all American micropolitan markets.

1 Response to Baldwin County, Alabama Named One of the Strongest Local Economies in America